The Teop language is an Oceanic language of the Nehan-North Bougainville network of the North-West Solomonic Group of the Meso-Melanesian Cluster (Ross 1988). The island of Bougainville was torn by a civil war which lasted from 1989 to 1998. This war resulted in thousands of deaths ― an estimated 18,000 to 20,000 people lost their lives ― having a devastating effect on the speech population. With respect to the current situation, it is difficult to obtain accurate figures as to the number of Teop speakers today; figures from the last decade range from 5,000 to 10,000. Although these figures seem to be quite high for an endangered language, it is highly endangered. Factors like marriage outside of the Teop speech community, the influence of neighbouring languages, the increasing use of Tok Pisin as a lingua franca and the use of English in schools further contribute to its endangerment. 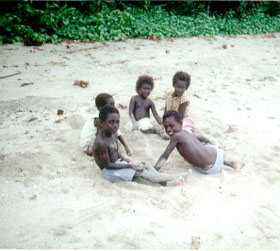 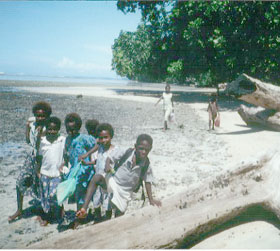 Typological characteristics of the Teop language

The grammar of Teop shows many characteristics that are typical for Oceanic languages, but also some unique features, especially in respect to the verb complex and the argument structure.

Teop has three noun classes (n.e., n.a., n.o.) which manifest themselves in distinctive articles and are to some extent semantically motivated. The noun does not inflect; number is expressed by articles, quantifiers, numerals, and occasionally by reduplication.

Tense/ aspect/ mood is expressed by particles and reduplication.

The paradigm of pronouns and pronominals shows the number categories of singular (SG) and plural (PL). There is no dual.

The first person plural distinguishes between exclusive and inclusive.

Syntactic features of the clause

Teop has an exceptionally high number of ditransitive constructions.

Transitive verbs can be made ditransitive by adding the causative prefix.

Transitive VCs can be made ditransitive by the incorporation of prepositions.

The grammatical relations of subject, primary object and secondary object are indicated by the interaction of constituent order, indexing in the verb complex and particular articles for certain kinds of objects.

The order of constituents in clauses, noun phrases and verb complexes is: 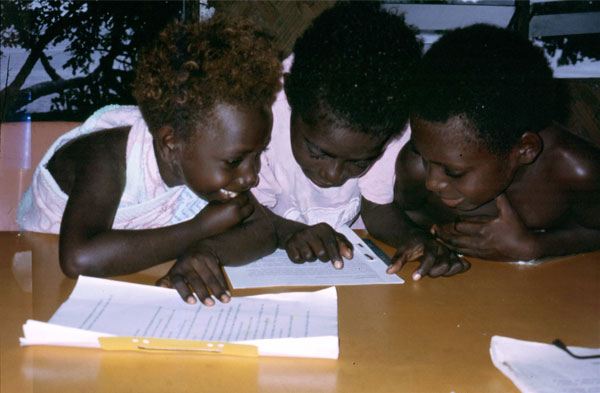 Teop children reading the preliminary version of a legend.