Ulrike Mosel, Chair of Linguistics at the Seminar für Allgemeine und Vergleichende Sprachwissenschaft, University of Kiel, organised and supervised the project from 2000 to 2007. She is specialised in linguistic typology and Oceanic languages and has widely published on Oceanic languages, especially on Tolai (Papua New Guinea) and Samoan. From 1997 to 2000, she worked as a consultant in the Primary Education Materials Project of the Government of Western Samoan. She has been working on the Teop language together with Ruth Saovana Spriggs (cf. below) since 1992. In 2006 she was invited by the United Nations Development Program to be a reviewer of the Bougainville Human Develpment  Report. 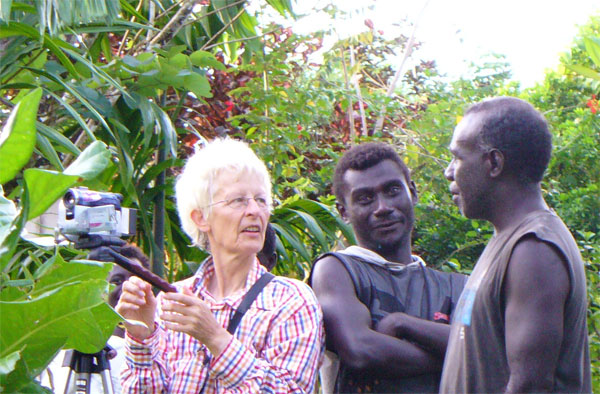 Roslyn Purupuru, a native speaker of Teop with a diploma in education, worked as a casual part time research assistant with Ruth Saovana Spriggs at the Australian National University in June and July 2004 and January and February 2005 while she was a student at the Southern Cross University, NSW, Australia. She assisted with translations and editorial work.

Jessika Reinig, M.A. (general linguistics, Kiel University) has written her M.A. thesis on the structure of the Teop verb complex and was a part-time research assistant in the project at the Seminar für Allgemeine und Vergleichende Sprachwissenschaft, University of Kiel from 2000 to 2003. In close cooperation with Ruth Saovana Spriggs, she mainly worked on the annotation (sound linking, glossing and translation) of recordings.

Alexander Radtke, M.A. (Phonetics, Kiel University) worked for several months as a casual part time research assistant in 2004 and 2005 on the phonetics and the phonology of Teop.

Ruth Saovana Spriggs, M.A. of applied linguistics, M.Ed., is currently a Ph.D. scholar at the Department of Political Science and International Relations at the School of Asian and Pacific Studies at the Australian National University, Canberra, and worked for the project as a part-time research fellow at the Linguistics Department there from 2000 to 2005. She speaks Teop as her first language and is an applied linguist specialised in literacy. From 1980 to 1988, i.e. before the civil war, she was the provincial language and literacy coordinator of Bougainville (North Solomons Province). In the Teop project, she has done numerous recordings on the culture and history of the Teop people and prepared transcriptions, translations and editions of her recordings. Together with Jessika Reinig she worked on the annotated ELAN versions of the recordings. Back in the 1990, she had begun to compile the Teop-English Dictionary and continued her work on the dictionary in the project when she worked together with Marcia Schwartz on the Teop Lexical Database. After completing her Ph.D., Ruth will continue her work on the Teop-English Dictionary.

Ruth Saovana Spriggs showing a print-out of the Teop Lexical Database to the late Misaake.

Marcia Schwartz, M.A. (general linguistics, Kiel University) worked as a part-time research assistant from 2000 to 2007. Being a native speaker of English, she already helped with the Teop-English dictionary as a student assistant before 2000. In the project, she was responsible for the Teop Lexical Database. But she also assisted with transcriptions and translations. Her M.A. thesis investigated the question of whether or not the Teop language has a class of adjectives.

Yvonne Thiesen worked as student assistant on the Teop project from 2003 to 2007 and assisted with the organisation and administration of the Teop archive and worked with Ulrike Mosel on transcriptions, glossings and translations of recordings. In 2007 she completed her M.A. thesis on reduplication in Teop. 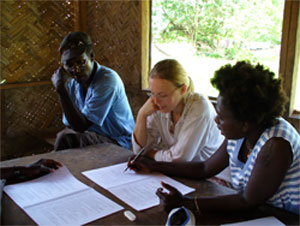 Ruth Siimaa Rigamu coordinated the work of the team in Hiovabon, Bougainville, and was Ulrike Mosel’s main teachers in the Teop language. She contributed to the collection of legends, assisted with the transcriptions and translations of the recordings and wrote definitions and examples for the lexical data base.

Enoch Horai Magum did most of the recordings and the transcriptions of the Teop legends and of the descriptions of the material culture, as well as a several interviews on ceremonies and history. He also did the editorial work of his recordings. 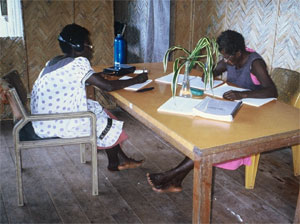 Joyce Maion did transcriptions and editorial work, and is the speaker of the recordings of the edited versions of the legends.

Jubilie Kamai and Ondria Tavagaga, two teachers of the primary school at Kekesu, did the final proof reading of the edited versions of the legends and the descriptions of the matierial culture and the ceremonies recorded by Enoch Horai Magum.

Neville Vitahi  is a graphic artist and did all the drawings for the Teop Picture dictionary and the descrtiptions of the Teop material culture.

Rodney Rasin is the illustrator of the Teop legends

The Seagull and the Tuna