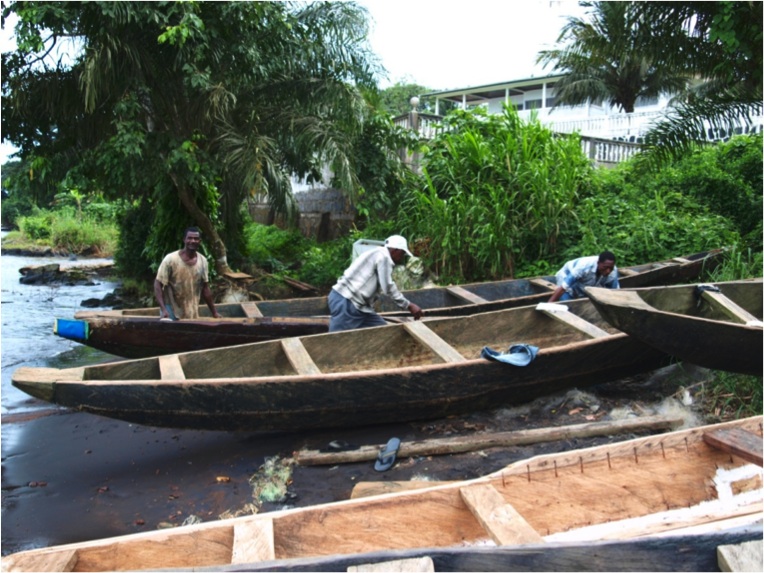 Bimbia, the place where Isubu is spoken, consists of three villages, namely Bona Ngombe, Bona Bile and Dikolo. These three villages are said to have been quite big in former times, but today consist only of a few houses each.

The population in Bimbia is rather mixed. Next to the Isubu people, immigrants from different places came to stay there. Some of them have become skillful fishermen, while others engage in farming. The farmers created a place called “Mbofi” or “Chop farm” which is located up the hill further inland.

The main subsistence of the Isubu people themselves is fishing, although they also engage in small scale farming.  In former times, fishing was a communal activity, because the fishing traps used at that time required several men to be set up, for example the Ndemba, which was a fish basket made out of cane. Nowadays, men also go fishing individually, using nets and hooks to catch the fish.

Formerly, the fish was dried and sold or bartered on nearby markets for food and other household needs. Today, most of the fish is sold fresh either on nearby markets or directly at the beach in Bimbia, where traders come to buy the fish, or it is kept in the fridge.

The Bimbia people were among the first people along the Cameroonian coast who came in contact with Europeans. While the first European traders didn’t come to the mainland, but traded with the Isubu on the sea or on islands close to the shore, Alfred Saker, a Baptist missionary, landed in Bimbia in the mid 19th century. He built his first church and school in Bimbia, wrote a grammar on the Isubu language and compiled a dictionary. A few remnants of the original church can still be seen in Bona Bile. Although most Isubu became Christians, remnants of a pre-Christian worship persist, for example the belief in water spirits.

Historically, the Isubu claim a Douala origin. The founder of Bimbia, Bile Bila, was said to have moved eastward along the coast following the seasons of the fishes. When he came to the present site of Bimbia, he decided to settle there and brought his wife to that area. They had two children called Ngombe and Mbimbi. As the population was increasing, their children moved a bit further  and founded the three villages which are found today: Bona Ngombe, Bona Bile and Dikolo.