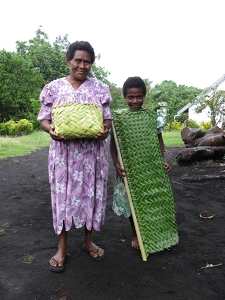 The country’s linguistic diversity corresponds closely to the socio-cultural diversity. While in the neighbouring regions of Micronesia and Polynesia, people traditionally travel longer distances and trade with a larger number of neighbouring societies, in Melanesia communities tend to keep to themselves and exchange goods, women and information only with a restricted number of close-by neighbours. And this inclination has carried over into colonial and post-colonial times: Today, there are differences between close villages, sometimes even within the same settlement, with regards to denomination, whether the main language of education is English or French, and where preferred marriage partners come from.

The local economy is based on subsistence farming. Each family has hereditary ownership of certain patches of land and uses them to grow crops, mainly for their own consumption. The main crops in West Ambrym are starchy foods such as taro, sweet potato, cassava and various types of banana. This diet is complemented by green leaves from a variety of plants, ranging from ferns to the young leaves of breadfruit trees. Edible leaves are collectively known as kabis in Bislama and as ivyo in Daakaka.

Fruit such as mango, breadfruit and soursop are abundant during their respective seasons. Some are available year-round such as pawpaw and coconut. The coconut palm is by far the most important plant economically: All of its parts are used, especially the leaves which are woven into mats, walls of houses, baskets and fans; and the fruit, which provide drink, food and the raw material for copra, which in turn is the major source of income for most households. 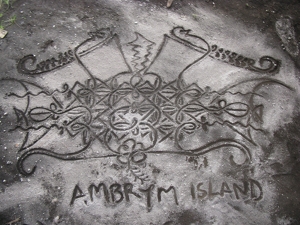 The people of Ambrym have preserved much of their rich cultural heritage, and we are trying to document practices like traditional dances, songs, children’s plays and sand drawings together with the associated use of language.

The sand drawings of Ambrym in particular are a celebrated icon of the intricate artistic culture of Vanuatu. Several dozens of these complex drawings are still known and new ones are still being created

Luckily for our project, the people of West Ambrym remember a large amount of traditional stories, ranging from children’s stories about lisepseps – a race of dwarf-like, magically gifted bush creatures – to sinister tales of demons and ghosts, to beautiful and dramatic legends.

Many stories are associated with songs. Often, the song appears to be a key to the meaning of some otherwise enigmatic stories. In more recent stories, the song is often the humorous punch line.

Traditionally, all the major stages of the human life cycle have been accompanied by rituals and celebrations. These celebrations often include special songs and dances which are only performed for these occasions. Today, however, the knowledge about these historical practices is in decline.
We have been able to record some of the celebrations as they are performed today and document people’s attitudes towards the changing rhythm and style of life.

Ambrym is also a place of powerful magic, from love spells and exorcisms to the dark arts. Although much of this knowledge is kept secret, we were allowed to record some of the songs that accompany certain benign magic rituals.