Before the 1960s, the Aché—or Guayaki, as they are sometimes called by some anthropologists and neighboring indigenous groups—lived in small nomadic foraging bands in the Atlantic coastal forests of eastern Paraguay. Groups of allied bands with a common dialect, common rituals, and affinal relations formed a larger political unit known as irondy or “habitual friends.” There were four of these groups living in eastern Paraguay at the time of contact in 1959: the Northern Aché, the Yvyturuzu Aché, the Ypeti Aché, and the Ñacunday Aché. The Northern Aché roamed an area of about 18,500 square km between the Acaray River and the Jejui River drainage systems (Hill & Hurtado 1996:49), while the Yvyturuzu and Ypeti Aché occupied a much smaller area south of the Northern Aché home range in the foothills of the Yvytyruzu Mountains. The core area of the Ñacunday Aché was approximately two hundred kilometers east of the Yvytyruzu Mountains in the headwaters of the Ñacunday River. 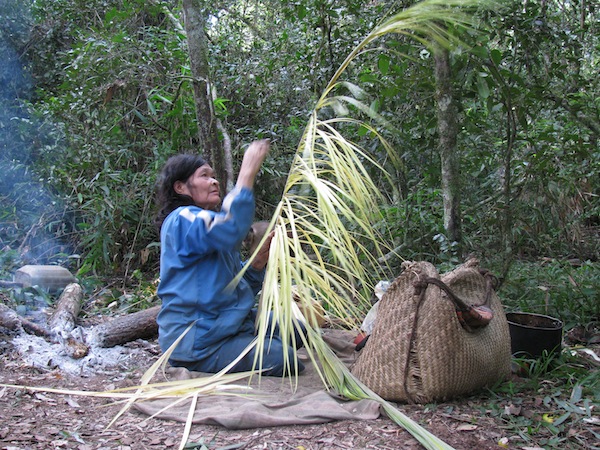 Important rituals marked the entrance to and exit from the tribe at puberty and death. At first menses, a girl was secluded from the rest of the band for several days, during which her parents and godparents (djary) carried out her initiation. The girl’s face was covered with a hood made of woven palm (aicho) before her djary purified her with a mix of timbo shavings and water. Her hair was then trimmed short in the style of adult women. Men who had previously had sex with the initiate would also undergo ritual purification (see Clastres 1972:185-191). When a boy first began to have facial hair, his godfather used a sharp bone to perforate his lip in a lip-piercing ceremony. When the wound healed, he wore a wooden lip plug, or beta, in his lower lip. Both sexes underwent ritual scarification to culminate their initiation, though in the case of Aché boys, the scarification could happen years after he received his beta (Clastres 1972:189).

Death rituals varied among the four Aché groups, though all of them shared the preoccupation with driving away the malevolent spirit of the dead. At a funeral, the newly deceased’s possessions—a woman’s basket and mats or a hunter’s bow and arrows—were burned, and the bodies of specific dead persons—particularly influential hunters, ‘angry’ people, or those that died violent deaths—were occasionally burned as well. The Ypeti Aché were the only subgroup to practice funerary cannibalism (see Clastres 1974).

Rituals governed the reunion of dispersed bands. Reunions within the Northern Aché, Yvyturuzu Aché, or Ñacunday Aché were based on a martial contest known as tõ mumbu, or “head splitting.” Tõ mumbu was held when an individual demanded djepy, or revenge, for a perceived offense or the death of an adult. Ten to fifteen bands fought with a two-meter long wooden club, each fighter painted with charcoal and vulture down (for a more detailed description, see Hill & Hurtado 1996:71-72.) Following tõ mumbu, the participants would ceremonially hit their mothers and adult sisters as the women ritually wailed. Reunions among bands of Ypeti Aché were strikingly different from tõ mumbu. Men painted themselves in charcoal and vulture down as the other subgroups did before tõ mumbu, but instead of fighting, men from different bands paired off and tickled each other. A period of song and celebration culminated in a game known as proaa mata, or “get the bean” (for a more detailed description, see Clastres 1972:230). 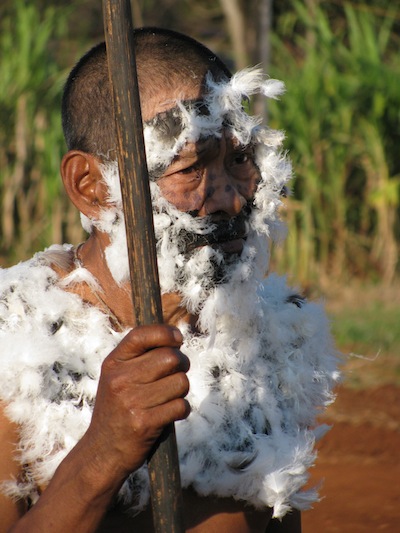 From 1959 to 1978, deforestation, attacks by Paraguayan colonists, and virgin soil epidemics forced the Aché subgroups onto reservations. Drastic cultural change followed. Older Aché continue to hunt when they are able, but hunting is no longer the primary subsistence. Most communities subsist by a combination of small-scale agriculture, wage labor, and soybean production. Since the late 1970s and 80s, most Aché have converted to Evangelical Protestantism. A few have also converted to Catholicism.