Aché is currently classified as a member of the Tupi-Guarani (TG) language family (Rodrigues 1985), a widely spread family in the South American lowlands. Aché shows a high lexical similarity with other TG languages, yet it possesses some important grammar features that are markedly different from others in that family. Various specialists (Dietrich 1990; Jensen 1990; Jensen 1998; Rodrigues 2000) have suggested that this might have resulted from language contact.

Aché is spoken today by around 200 fluent speakers and 400 semi-speakers in eastern Paraguay. Intergenerational transmission is interrupted, as only older generations speak Aché fluently and in most speech domains. The younger generations have switched to the two national languages in Paraguay: (non-indigenous) Guarani and Paraguayan Spanish. 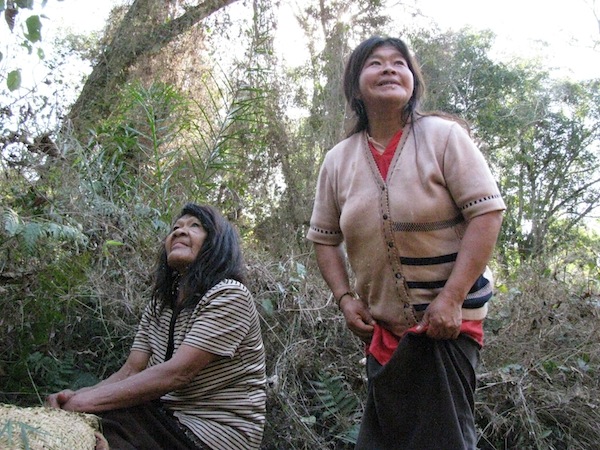 There are at present three main dialects of Aché: Northern Aché, Yvyturuzu Aché, and Ñacunday (or Southern) Aché. The Northern and Yvyturuzu dialects are quite similar, having been divided geographically for nearly forty years between the 1930s and 1971. The Ñacunday group was isolated earlier and reestablished contact with other subgroups only recently. A fourth linguistic subgroup—Ypeti Aché—is virtually extinct today as there are only a handful of old speakers. The ADOP team works with members of all dialectical variations.

Aché differs from other TG languages in various respects: On a phonological level, it has a reduced inventory of consonantal segments, and consequently, fewer regular sound changes, reduced phonological strings for word stems, different syllable structures, and the lack of long distance nasal harmony and related allomorphy, commonly described phonological features for TG languages (cf. Piggott 1992). On a morphological level, Aché grammar has not retained all prefix markers for TG. The languages have only one paradigm of free personal pronouns, as well as a severely reduced number of other functional morphemes, mainly derived from the nominal TG morphology. In syntax, Aché lacks the person hierarchy 1>2>3 in transitive constructions and cross-referencing system in intransitives, both well-known grammatical features of TG (see Jensen 1990; Jensen 1997; Rodrigues 1990; Meira 2006). Neither the marker system for cross-referencing nor the word order is maintained. A detailed description of language change and further refinement of contact hypotheses are central goals of linguistic research conducted within the projects.

Rodrigues, Aryon D. 1990. “I and You = neither I nor You: the Personal System of Tupinamba.” In Amazonian Linguistics: Studies in Lowland South American Languages, ed. D. L. Payne, pp. 393-406. Austin: University of Texas Press.