Scientific analyses of cultural objects and techniques suggest that the Cashinahua had been living in their traditional territory in the Juruá Basin at least since the 13th century. They were first explicitly mentioned by the English geographer William Chandless in an 1866 publication. Since the 1850s there had been occasional expeditions from the Brazilian state of Pará to exploit rubber, cacao and other products of the forest. By the end of the 19th century the first Peruvians came to the area, felling trees to extract rubber. Shortly afterwards Brazilian settlers arrived to make the Cashinahua work in their rubber estates. During this first period of massive contact violent massacres of the indigenous population occurred which only ceased in the second decade of the 20th century when the Cashinahua in the rubber estates had gradually become economically and socially integrated.

In 2006 most Cashinahua live in villages, but some have temporarily or permanently installed themselves in Brazilian (Tarauacá, Santa Rosa) or Peruvian (Puerto Esperanza) towns to participate in a more developed infrastructure.

Traditionally, the Cashinahua are hunters and horticulturalists. Fishing and gathering are minor activities which basically have the function of bringing variation into the diet and to complement alimentation in times when there is not enough game or little agricultural production.

For the Brazilian Cashinahua, since they started to work in the rubber estates, rubber extraction has been a central commercial activity which – after becoming independent of their former employers – they set forth in their own cooperatives. With the economic crisis for this raw material in the 1990s they started to sell artifacts, agricultural products and began to breed livestock to be able to continue buying industrial products. Another important source of income for the individual families is the old peoples’ pension from the Brazilian government as well as the wages paid to teachers, health assistants or forestry agents. Nowadays rubber production has lost its importance for most Brazilian Cashinahua.

In Peru selling game and agricultural products to traders or artifacts in town are ways to earn money to be able to buy merchandise. In addition, there are professionals, active and retired ones, in these communities, too, who receive payment from the government. 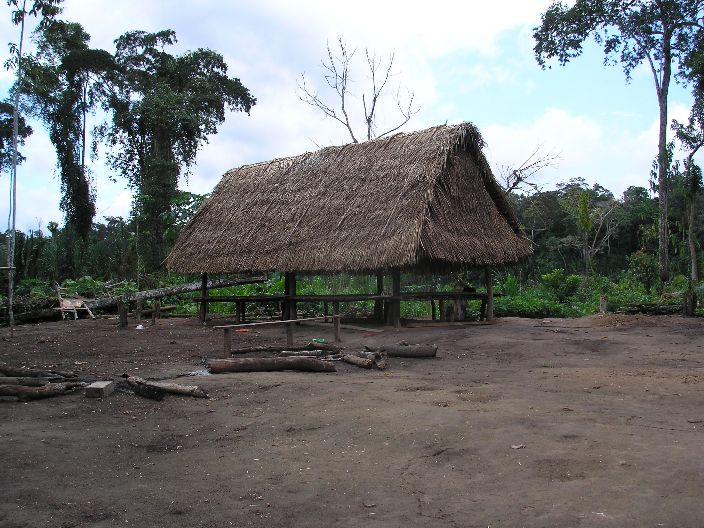 This may nowadays be considered a typical Cashinahua house. There are also tendencies, especially in Brazil, towards non-typical house-building with roofs made of corrugated sheet iron, walls deviding the space into cabins, etc. A traditional house, however, was more like the following one, taken by Erikson among the Matis, another Panoan group, at the river Ituí (Brazil). 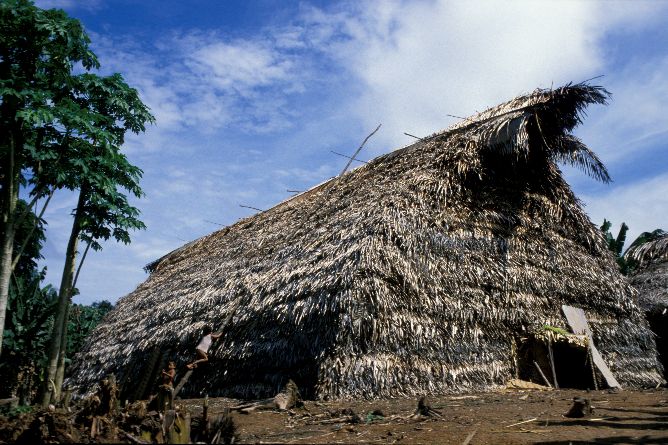 An ideal Cashinahua village (mae kuin) consists of two focal males (who are double cross-cousins and have interchanged their sisters), their wives, sons (who have also married each other’s sisters and live with their fathers-in-law), and their grandchildren. Other brothers of the two leaders, also married to the other one’s sister, may live in that village, too. In addition, people who know how to perform rituals, to cure illnesses and how to lead with the supernatural world must be included in the village’s population. Originally, a village was formed by a single big house (xubu) or, in case the population size was exceeding about 20 adults, two houses (hiwe). In recent times, however, the residential model has changed and dependants and members of the wider family live in separate houses. Each village is socially, economically and politically independent. Kensinger (1998:65) characterizes the position of the chief (xanen ibu) in a Cashinahua village as a “subtle” leadership whereby his full authority only becomes apparent in situations of major problems.

According to Lagrou (ISA 2005) the sexual division of labour and space is fundamental in day-to-day life. Male activities are hunting, cultivation of the land, looking for firewood, construction of houses and boats and rubber extraction. Political leaders in the public sphere in- and outside the village are men. Women are responsible for the collection of fruit and vegetables from the fields, preparation of food, looking after small children, weaving, pottery, breeding of chicken and ducks, water supply for drinking and washing of clothes and domestic utensils. In ritual contexts, the dual marital structure of the Cashinahua society is more important than the sexual division, as it is in some collective activities performed by men.

The weaving of hammocks and other items in characteristic geometric designs (kene kuin) is an activity performed exclusively by women. 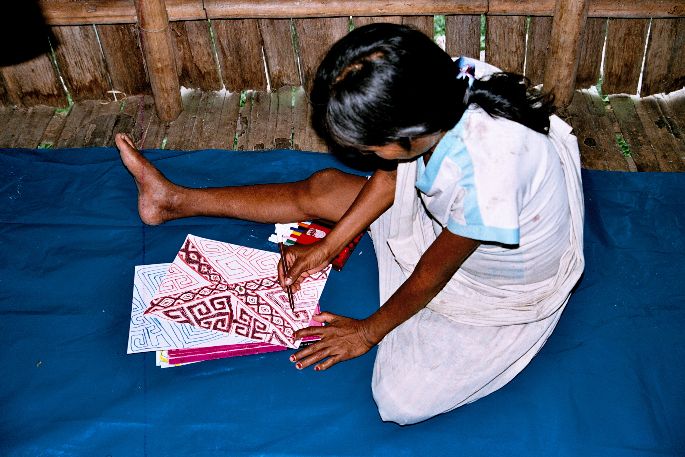 A gender-related socialization of the child starts at an early age. As soon as s/he can walk the child is given easy tasks belonging to its gender group.
A person is primarily defined by the moiety s/he belongs to and his/her marriage section. From birth, each boy is identified as a member of his father’s moiety (inu or dua) and of the marriage section of his father’s father. He receives his names (xuta) from his paternal grandfather. A girl belongs to the moiety of her father’s sister (inani or banu) and to the marriage section of her mother’s mother (who ideally is her paternal grandfather’s sister, too) from whom she gets her names (Kensinger 1998: 39). Traditionally, a child is called by one of his/her names only during the first years of life. As soon as s/he fully dominates the reference and vocative terms of the Cashinahua kinship terminology s/he will only be addressed by these. Adult members of the group still use their proper names when they meet relatives from a different region so that they can determine their respective kinship relation.

Although Cashinahua people have already assimilated many elements of the Western life-style, such as clothing, motor boats, shotguns, etc., their rich cultural tradition is still vital, especially in Peruvian villages. There are revitalization tendencies with regard to cultural activities (feasts and other rituals, certain discourse practices, oral history/ mythology, music) in the Brazilian groups, whereby these are often based on the knowledge of their more traditional Peruvian relatives. 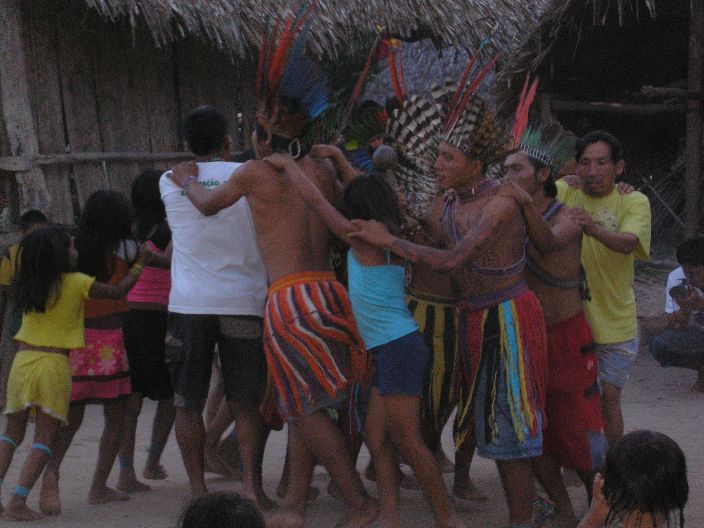 The use of the hallucinogenic liana (nixi pae) is not restricted to a few shamans as in other Amazonian groups but a collective practice among all male adult members of the Cashinahua society.

There is a vast amount of anthropological literature about the Cashinahua who, together with the Shipibo-Conibo, are the Pano group most studied until now. First observations on Cashinahua cultural traditions were written down in the beginning of the 20th century by the French Father Constantin Tastevin who had been traveling in the Juruá-Purus basin. Another publication from 1914 [1941], a collection of Cashinahua historical and mythological narratives, presented in the language itself together with a word-by-word gloss in Portuguese, was produced by the Brazilian historian João Capistrano de Abreu, together with two young Cashinahua men. Kenneth Kensinger was the first anthropologist who in the middle of the 1950s lived for some time among the Peruvian Cashinahua. Other anthropologists (among them Barbara Keifenheim), studying different aspects of the culture, followed in the 1970s and 80s. The Brazilian groups have been studied since the middle of the 1970s.

The Cashinahua language has not received the same attention as the culture. From the 1960s onwards SIL-members (Cromack, Montag), predominantly engaged in bible translation, have published some analyses and a dictionary on the variety spoken in Peru. Since 1989 the linguist Eliane Camargo has visited groups on both sides of the border and published her dissertation and a variety of articles on different grammatical aspects.