Tradition of origin reveals that the Bezen people came in from Nigeria. About three hundred years ago, they left Takpa in Nigeria and settled at Kipanbatwueh, which is one of its neighbouring villages presently known as Akum. It is believed that they left Takpa because of war and the frequent deaths of their people, which were attributed to witchcraft practices in the area. While in Kipanbatwueh, they experienced a similar situation and therefore migrated further to the Ndoshi hill known as Bezen old town or Bezen hill. Migration from Akum to the Ndoshi hill was initiated by the Bozum Beka royal lineage, led by their chief Kelekwang. Because of the difficulties of cultivating on the hill and its infertile nature, their stay on this hill was brief as they soon migrated and settled at the present fertile site that has valleys and a forest which provides for hunting, located besides the river Katsina Ala, with its economic advantages. 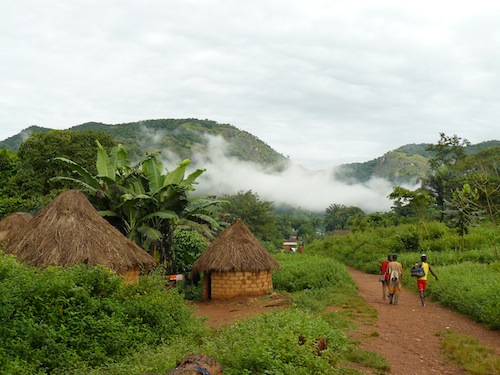 Morning mist over the river Katsina Ala

Houses in Bezen are constructed with locally produced red mud bricks. The most common roofing material is grass with a few houses roofed with corrugated iron sheets. The houses are of various sizes and shapes. While the houses for sleeping are round, the ones for cooking are either rectangular in shape. Most of the houses are clustered together in one compound.

In addition to these houses which are in the residential areas, the Bezen people have special houses called āwūk ‘farm houses’ which are located in farms, but a few can also be found in the residential areas. Their main function is drying and storing of harvested crops, though they equally serve as temporary residences in the farm. Sleeping space in farm houses is located in the roof as a protective measure against wild animals at night. Each farm house has a locally made ladder for climbing into the roof. 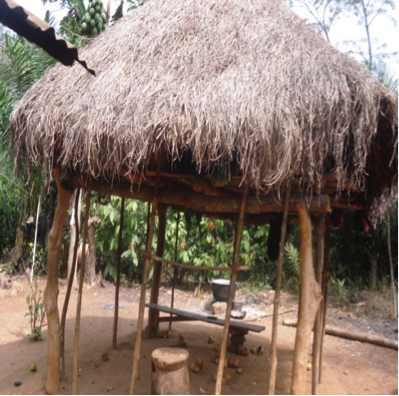 Bezen is a patrilineal and polygamous society with almost every male married to two or more women. The husband is the head of the family. He provides accommodation to all his wives and each wife lives in her own room with her young children.

Bezen is a politically centralized society consisting of four quarters: 1. Kunashin orahan, ‘across the river’, it is the only quarter located on the other bank of the river. 2. Okung is the quarter that is located ‘besides the river bank’. 3. Kahang meaning ‘dwellers near the rock’ has its name because of the rocky nature of the area. 4. Buhim means ‘dwellers in the gravel area’. Each quarter is ruled by a Quarter Head, meingwa who is answerable to the chief. As an arm of the centralized administration, there is a Village Traditional Council adak naeri kikun, a Women Development Organ utum-aghereh and a Youth development Organ kikun balem asing.

Bezen is a polytheistic society with a variety of spirits or gods. Each spirit performs a specific function to the society though some overlapping exists. These supernatural forces include:

Even though the younger generation still possesses knowledge about the world views of the elders, the majority has converted to Christianity.

The Bezen economy revolves around subsistence farming, hunting and fishing. Cocoyam, plantains, beans, maize, cassava, and groundnuts are produced in the village and traded with neighboring communities. Cocoa production has recently been introduced, though on a small scale.The forest provides for hunting and the river Katsina Ala, on whose banks the village is situated, is rich in fish. 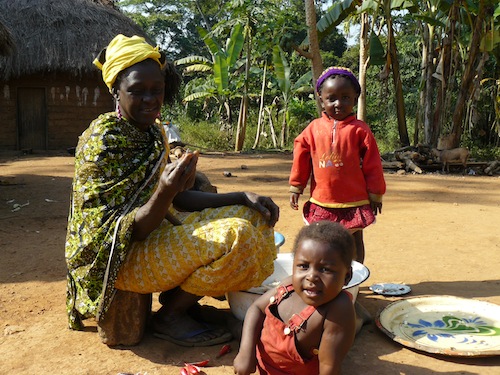 There are many difficulties the Bezen have to face on a daily basis. There is neither electricity, nor water supply. During the dry season water becomes very scarce, and transport basically is a problem due to a lack of infrastructure. While current plans of the construction of a dam close to the village give hope to some who expect an improvement of living conditions through future access to electricity and a better road, others rather see the dangers of cultural disruption and disintegration of the community in the case of resettlement.