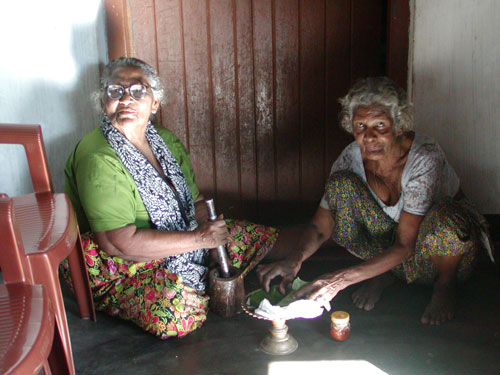 On the left, Abbas Siti Damani, 75, fondly addressed by all the community, including us, as Nenek (‘grandmother’), in her daily ritual of preparing sireh (‘betelnut’) with her Sinhalese neighbour. January 2004, Kirinda, Sri Lanka. 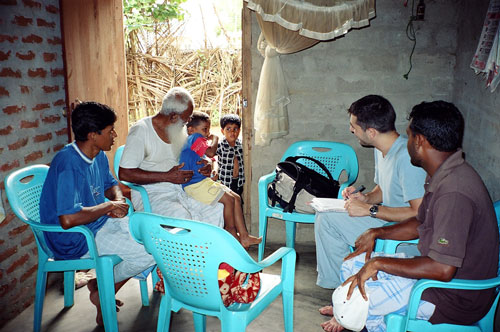 Vital generations of Kirinda Java: Umberto Ansaldo with R.M. Nahar, 36, and M.T.M. Rihan, 27, acting as translator, in consultation with J.M. Rafaidin, 77, and two of his grandchildren, one of whom, during one of the elicitation sessions, after an item was being repeatedly clarified, chimed in with the word-for-word gloss obviously wondering why the visitors were so slow to pick up the language. January 2004, Kirinda, Sri Lanka. 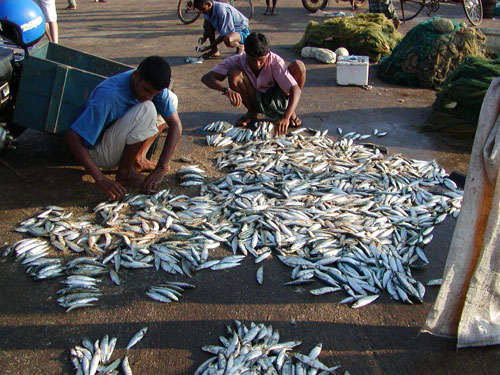 On a typical morning at the fishery harbour, two young fishermen sort the bounty of their night’s work. The main source of livelihood of this small village of Kirinda is fishing. Poverty, however, means that there are no refrigeration facilities at the harbour, and fishermen have no choice but to sell quickly at the relatively low price they are offered by restaurant suppliers for their catch. December 2003, Kirinda, Sri Lanka. 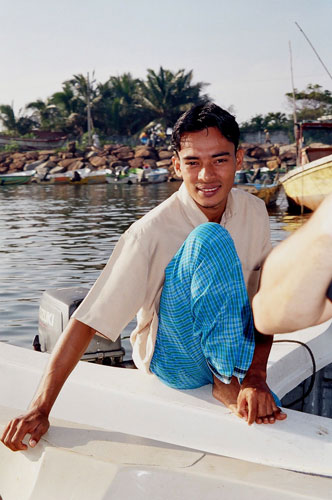 Relaxing on board a friend’s boat before we headed for the Great Basses lighthouse one morning, M.T.M. Rihan, 27, one of the many young people in the village of Kirinda who are educated but unemployed, also fishes; fishing is the village’s main livelihood. Speaking Sri Lanka Malay, Sinhala, Tamil and English, he acts as assistant and translator during our data collection sessions. December 2003, Kirinda, Sri Lanka. 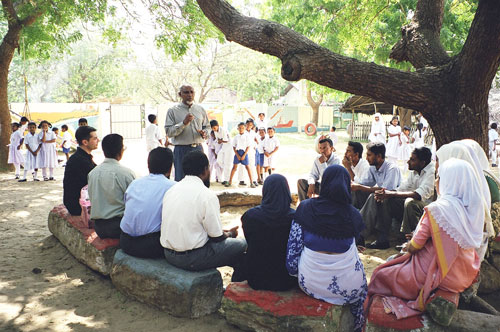 Together with B. Jalaldeen, the school principal and one of our primary contacts in Kirinda, we explain our research to the village school staff. Later in the gathering (after a spontaneous song by the principal), we make a donation to the school in cash and kind as part of our contribution to the community for their part as consultants in the documentation process, January 2004, Kirinda, Sri Lanka. 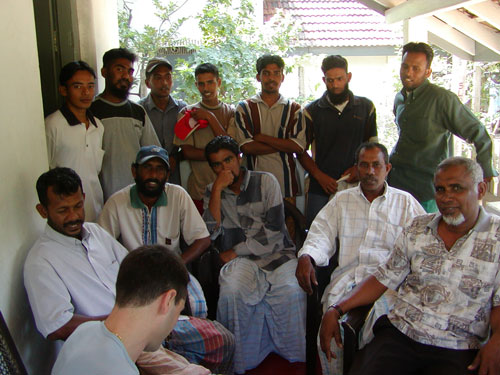 A gathering of several of the Kirinda Malays during our first visit to the community, curious and interested. Seated rightmost is B. Jalaldeen, the school principal and a leader in the community and our primary contact. The three other older males (seated) work for the Sri Lanka Port Authority in Kirinda, in whose porch we are gathered. The majority of the young men are unemployed, even though they have secondary level education, while a few fish or dive for a living. December 2003, Kirinda, Sri Lanka.