The project seeks to document the linguistic and cultural knowledge of the speakers of Savosavo. The thematic focus is ‘local history, culture and environment’. This topic is approached by collecting narratives, conversations and procedural texts on the one hand, and lexicographic data on the other hand.

Narratives, conversations and procedural texts are collected on four focal research areas: First, all aspects pertaining to living on a volcano will be considered, as this is one especially relevant environmental factor that has an impact on the every-day life as well as the traditional beliefs and customs. Second, biographies and eye-witness accounts of recent historical events such as the Second World War and the national independence in 1978 are recorded, providing an opportunity for the Savosavo speakers to record their unique view of those events that shaped their lives, as well as to document the changes in life style. Third, traditional knowledge and customs are documented that are in danger of being lost when the last knowledgeable speakers die. Finally, statements and discussion on topics in the field of hortative discourse are recorded, including data on traditional leadership and modern government, age, gender and land and marine tenure. Lexicographic data are systematically collected in the areas of ethnobotany, ethno-zoology and ethno-ecology, as well as on toponyms.

One example of traditional knowledge that was documented as part of this project is the building of traditional fishing bridges. A fishing bridge is a construction of bamboo, wood and vines that is built from the beach out into the sea, and thus allow fishing in deeper waters without getting wet. There are different kinds of bridges, tailored to different methods used to target different kinds of fish, and none of them is still used today. As part of the project, workshops were organized in which a group of young men were instructed by one or two older experts in how to construct these fishing bridges.

Another example is the production of baskets from coconut leaves. There are many different types of basket, and the project aims to document the production process for as many of them as possible. 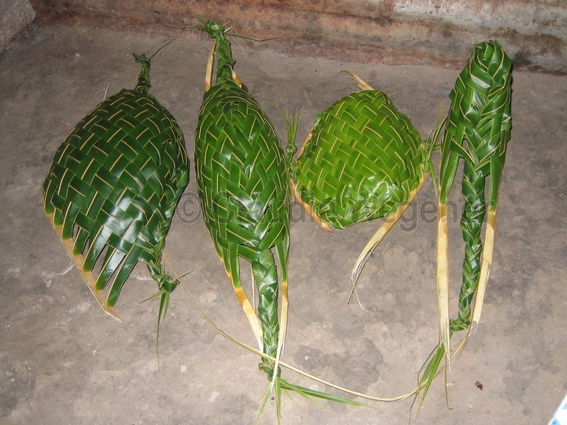 An important part of the project is the preparation of materials for the speech community. A DVD was created from the recordings of the koku fishing bridge workshop, which was received with great enthusiasm. It is planned to also produce DVDs for the other types of fishing bridge. Other materials produced so far include a story book with ten customary folk stories, an illustrated primer of the unified orthography agreed upon by the members of the team and other community leaders, and a plate providing illustrations and the Savosavo terms for numbers from 1 to 20, and the tens up to 100. Copies of these have been handed over to the four schools on Savo, and received with enthusiasm by both teachers and students. They are available to registered users in the Savosavo corpus in the archive.