Cashinahua – or Hantxa Kuin as it is called by its speakers – belongs to the Panoan family. It is an agglutinating language with prototypical roots for nouns, verbs, adverbs and a restricted class of adjectives. Nevertheless, the verb-noun opposition is not consistent. In addition, lexical categories are determined by their suffixation and respective utterance position. The default word order is SOV.

There are about 30 Panoan languages, most of which still have native speakers and about a third being already extinct. All Panoan languages are concentrated in one geographic region, the Amazonian lowlands in Eastern Peru and in adjacent parts of Brazil and Bolivia. This and the fact that they show close similarities indicates that they must have dispersed relatively recently from a Proto-language in comparison to other Amazonian families. There also seems to be a genetic relation between Panoan and Tacanan languages, as indicated by a phonological data analysis (Key 1968) so that some authors (e.g. Suárez 1973) consider them sub-families of a larger Pano-Tacanan family. There have been several attempts to further classify the Panoan family but – due to scarce data on many of the languages – these often differ considerably from each other. Loos (1999) divides Panoan into three major subgroups and a number of ungrouped languages, most of the latter extinct. Gordon (2005) divides the languages into seven geographic groups and categorizes some of them into four linguistic subgroups which do not coincide with those identified by Loos. Cashinahua, spoken by about two of around six thousand members of the Cashinahua ethnic community who auto-denominate themselves Huni Kuin, belongs to the Yaminawa subgroup given by Loos. According to Gordon (2005) the closest related language is probably Sharanawa.

There are no official numbers or in-depth studies regarding the sociolinguistic situation of the language but several tendencies have been observed and their impact on the population has been estimated. Cashinahua is still spoken on both sides of the Brazilian-Peruvian border but for historical reasons the development of the language has been different in the two countries. On the Peruvian side the rate of bilingualism, especially among the adult population of 30 years and older and especially among women, is still fairly low (5 to 10 % are estimated by Gordon (2005) to be fluent in Spanish) but increasing and mostly the same applies to the formerly Peruvian Cashinahua from the Curanja river who from the 1970s onward have settled on the Brazilian side of the river Purus. In the Peruvian and the Brazilian Purus area there are young people who are fluent in a regional variety of either national vernacular and sometimes in both. By contrast, in the Jurua basin in the Brazilian state of Acre where the native population has been in contact with Brazilian society for more than 120 years there are many young Cashinahua who speak their native tongue only with difficulty and who are proficient in Portuguese.

Code-switching in conversation is frequent and lexical borrowings are far more numerous in the Jurua basin in Brazil, too, where the Cashinahua are still referred to as “índios seringueiros” due to the fact that in the late 19th century, during the rubber boom, most members of the group were forced to work in the rubber estates (“seringais”) and live in colonies where Portuguese was the lingua franca. In the 1920s, as a result of this development, the Cashinahua who originally had all been concentrated in the Juruá Basin in Brazil were divided into a Brazilian and a Peruvian group when after a revolt against their employer a small group escaped upriver to the headwaters of the Upper Curanja in Peru. Owing to a complete isolation for more than 20 years this group was little exposed to the national language and retained more of the ancient cultural traditions. The Brazilian communities, in constant contact with Brazilian society, abandoned many traditional rituals but nevertheless managed to keep their language and cultural identity. Apart from the fact that their variety of the language differs more considerably from the one spoken in Peru, there is possibly some dialectal variation between these territories, too. Only in the late 1940s the Peruvian branch reinitiated contact with the national society in order to obtain industrial products (metal tools and weapons), and a part of them began to settle along the banks of the Upper Purus river.

There were several instances of inner-group migration. After an epidemic of measles in 1951 which killed about 80 % of the adult Cashinahua population in Peru, the surviving members fled to Brazil to live with their relatives at the Envira river. Since they could not get accustomed to the different conditions of life in the rubber estates, most of them returned in the following years and founded new villages.  When Kensinger first visited them in 1955, there were only about 100 Peruvian Cashinahua who had recently returned from Brazil. In the 1970s, again, a few families from the Upper Purus started to move further down river and re-establish contact and matrimonial ties with their Brazilian relatives. Currently, especially older Peruvian Cashinahua move to Brazil to profit from a better health care and social welfare system. In addition, there has also been migration within the different Brazilian territories and from the indigenous territories into Brazilian and Peruvian towns and cities. It is also not rare for Cashinahua to marry Brazilians and Peruvians. 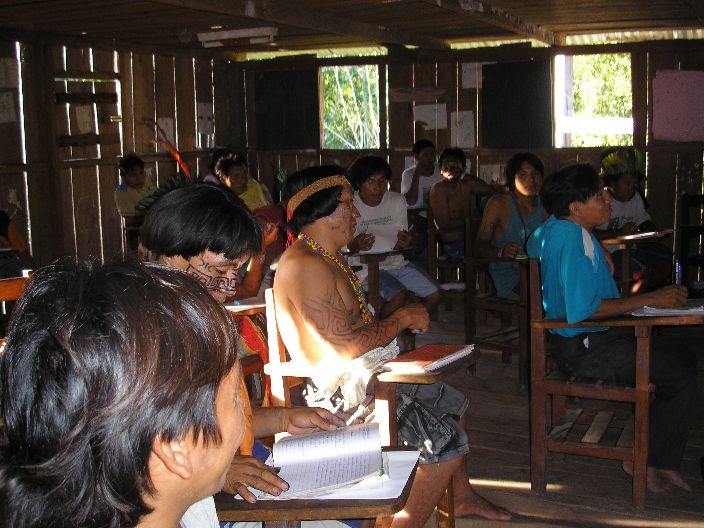 In both countries bilingual education programmes have been introduced. In Peru, didactic material was already developed in the 1960s by members from the Summer Institute (see SIL-homepage for examples), and the first Cashinahua teacher who received his professional training also by SIL-members started alphabetization in the early 1970s in the village of Balta.

Nowadays there are indigenous as well as non-indigenous teachers in every Peruvian village teaching the children in all disciplines in both Cashinahua and Spanish. In Brazil the formation of teachers was initiated by the NGO Comissão Pro-Índio (CPI), in 1983. In each country a different orthography of the Cashinahua language has been developed and is used for the production of educational material.

In conclusion to this section it may be stated that the Cashinahua language is highly endangered: Of a relatively large ethnic population only a part is still fully proficient in their native tongue. The varieties spoken in different territories populated by Cashinahua  show phenomena induced by contact (code-switching, lexical borrowing) to differing degrees depending on the proximity of the community to a Brazilian or Peruvian town and to the mobility of its members. Since during the last few years an electricity-supply (solar-energy) has been set up in several Cashinahua villages on both sides of the border, the influence of mass media (radio, TV, video/DVD) is constantly growing, too. However, it must be emphasized that indigenous associations, especially in the more endangered territories of Brazil, make considerable efforts to protect, maintain and in some cases revitalize their language and culture. An example is the linguistic workshop for Cashinahua teachers held by Camargo in May 2006 which was organized by OPIAC (“Organization of the indigenous teachers of Acre”).