The environment and the people 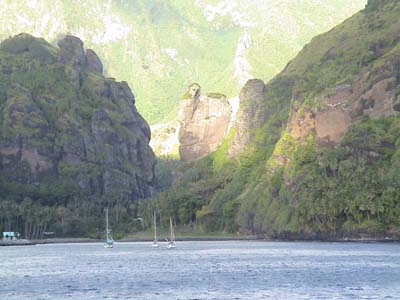 The Marquesas islands are basically of volcanic origin on which one typically finds black lava, basalt and red tufa. The landscape of the Marquesas is characterised by high volcanic mountains and rugged steep cliffs. Due to the cold Humboldt stream coming from the Antartic there are no coral reef formations around the islands. The first photo shows the famous Bay of Virgins in Omoa (Fatu Iva, South Marquesas) frequently visited by yachts because of its spectaculars views during sunset. 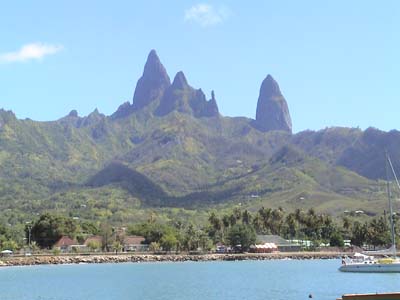 This is a view from the bay of Hakahau looking at the highest mountain Oave (1203m) of ‘Ua Pou (North Marquesas). These pics of ‘Ua Pou inspired Jacques Brel, a resident of the Marquesas in the last years of his life, to write the song “La Cathédrale”.

A view from the village of Hakatao (‘Ua Pou, North Marquesas) with modern-built tin-roofed houses. 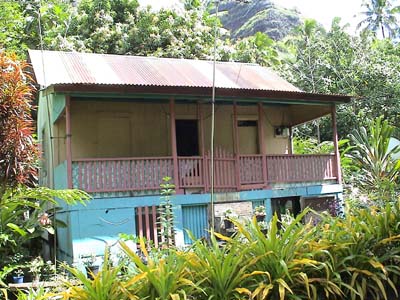 A colonial-style house in Hanaiapa (Hiva ‘Oa, South Marquesas). At one point in their colonial history, this type of house was wide-spread in the Marquesas, nowadays only occasionally encountered in the South Marquesas. 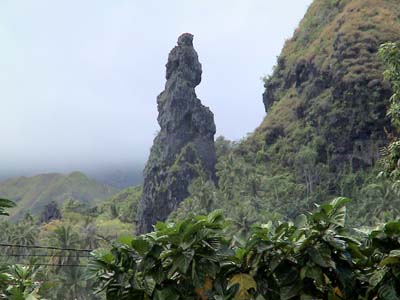 Rock in Omoa (Fatu Iva, South Marquesas) resembling the gigantic moais of Easter Island. The photo further shows the dense vegetation of Fatu Iva island. In the foreground one can see the so-called noni-plant which is said to have healing powers and is nowdays one of the major cash crops of the Marquesas. 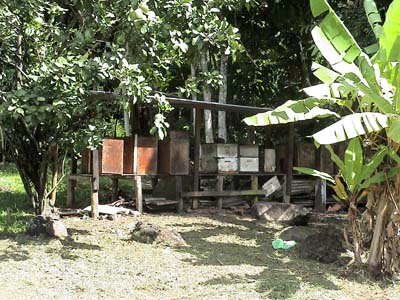 This photo depicts honey production in Omoa (Fatu Iva, South Marquesas). In the foreground one can see banana and grapefruit trees which are to be found in every household compound on the Marquesas. 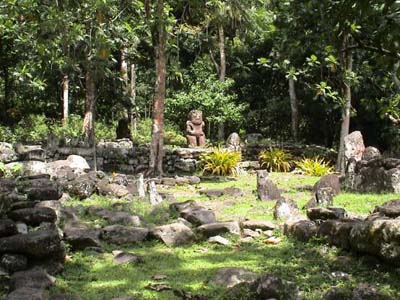 Ancient ceremonial site of Iipuna at Puamau (Hiva ‘Oa, South Marquesas) with Taka’i’i, the largest stone tiki (well over 2m) of the Marquesas 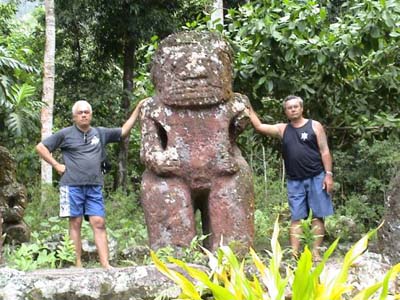 Taka’i’i and the two main collaborators of the project: Edgar Tetahiotupa (left) and George Teikiehuupoko (right).

The preparation of a traditional dish of manioka pudding cooked in hibiscus leaves and mashed with a stone pestle (Hakatao, ‘Ua Pou, North Marquesas). 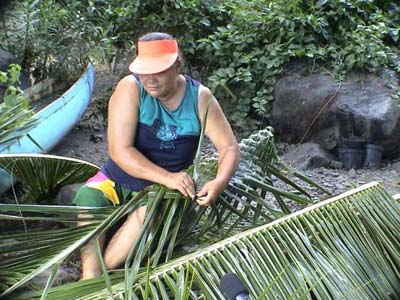 A man grating coconut by hand (Hakahau, ‘Ua Pou, North Marquesas). This becomes a rare site on the Marquesas because many households own electrical coconut graters nowadays.

The indigenous population of the Marquesas islands live in one of five archipelagos of French Polynesia situated about 1400 km northeast of Tahiti which is the political, economic, educational and administrative center of French Polynesia. French Polynesia is a so-called TOM (=territoire d’outre mer) of France which has partial internal self-government.

The first European contact was already made in 1595 by Alvaro de Mendaña y Castro, but it took another 200 years before European contact became more intense by the end of the 18th century (Thomas 1990). The pre-European history is still a matter of debate among experts: archaeologists have divergent theories about the first settlements of the indigenous population. However, it is generally assumed that the indigenous population of the Marquesan archipelago belong to the Lapita cultural complex which originated from south-east Asia or western Melanesia (Thomas 1990:6; Ottino 1997:7ff.). Some researchers believe that the first settlers of the Marquesas arrived 200 BC ” 150 from Tonga or Samoa and that the Marquesas was the ‘dispersal center’ during the settlement of Eastern Polynesia. Others are inclined to argue that the Marquesas and the Society islands were settled at about the same time and that both regions played a crucial role in the settlement of eastern Polynesia (Thomas 1990:7). The contact between Marquesans and other eastern Polynesian populations was said to be sporadic. The mountainous topography of the Marquesas islands on which most valleys are equally inaccessible by land as well as by sea are thought to have caused great isolation and a clanish and aggressive culture which have promoted warfare even between neighbouring valleys and tribes of one island (Handy 1923; Kellum-Ottino 1971; Dening 1980; Hughes& Fischer 1998).

The present situation of the language and culture and their transformations are complex and can only be explained by historical, cultural, religious and economic transformations since the first European contacts became more intense in the late 18th century. Historical events such as the arrival of Captain David Porter of the US Navy in 1813 who brought weapons and alcohol and the French annexation of the Marquesas in 1842 had considerable and partly catastrophic effects upon Marquesan society (Thomas 1990:2ff.). When the French arrived in 1842 the traditional chiefs were replaced by French officials which ‘essentially fractured the indigenous political system’ (ibd.:4). The demographic situation underwent a dramatic development in the first 100 years of European contact partly due to excessive alsohol consumption and epidemics brought in by European vessels (Bailleul 1996). The missionaries rigerously forbade distinct cultural practices such as tatooing, chanting, dancing, polyandrous marriage and also the elaborated Marquesan system of tapu “taboos”. The first schools were already established by the end of the 19th century. Education was in the hands of the catholic missionaries and school lesson were of course in French.

The first 100 years of French presence brought about more drastic changes in the cultural and social than in the linguistic domain. Until the 2nd World War only a minority of the indigenous population was bilingual.When France’s interest in French Polynesia as a nuclear testing ground increased tremendously after the 2nd World War, in particular in the 1960s, the dominance of the French language was not only felt in the educational and administrative sectors, but also in the economical sector and in the domain of mass media.

In the past 30-40 years life in French Polynesia and the Marquesas has become more and more westernised and a shift from the indigenous Polynesian languages of French Polynesia to French can be observed throughout French Polynesia (Tetahiotupa 2000). In the most populated areas of the Marquesas where about 70 % of the population lives, the language used to address children at home has clearly shifted from Marquesan to French: most children under age 15 have acquired French as their first language. Three factors have largely contributed to the language shift from Marquesan to French as a home language:

The media revolution and western ‘modernisation’ in French Polynesia and on the Marquesas did not only have drastic and devasting effects on the indigenous languages, but also on communicative practices and the transmission of remaining indigenous cultural practices. In the 1960s and 1970s, i.e. before the media revolution in the 1980s, indigenous stories and legends were still orally transmitted by the older to the younger generation. This is now lost due to a shift towards western entertainment of TV and video by the younger generation. Also western products such as processed food, clothes, building materials for houses, cars, tools etc. have become very established and widely popular due to regular contacts with vessels from Tahiti very two to three weeks. This greatly replaces indigenous traditional ways and practices, in particular in the domain of food preparation and the manufacturing of traditional artifacts and natural products.

All Marquesan children are constantly exposed to the French language from the age three. At that age they have to attend the so-called classes préparatoires, a kind of kindergarden, where they are exposed to a full immersion in French. All school classes begin early in the morning (7.30 am) and finish late in the afternoon (3.30 pm). A shift from Marquesan to French cannot only be observed in all urbanised centers of the Marquesas (Taioha’e (Nuku Hiva), Hakahau (‘Ua Pou) and Atuona (Hiva ‘Oa)), but quite recently also in the remote valleys of the Marquesas where Marquesan has often remained to be the language spoken at home. In these isolate and remote areas of the Marquesas, more and more parents and caretakers address their children in French because they feel the urge to come up to educational requirements because a good command of French ensures success in school life and further education (university level) and when seeking salary labor on the Marquesas or elsewhere in French Polynesia.

Quite generally, linguistic transmission in the Marquesan bilingual speech community is very complex. Marquesan and French are used, partly in different and partly in the same domains of everyday life. Moreover, the speech of Marquesan adults is characterised by French-Marquesan code-switching and code-mixing (Riley 2001; Cablitz 2002). Language-learning children therefore have a very varied and complex linguistic input. Tetahiotupa (2000) has pointed out that this development has a devastating effect on the language development of children in French Polynesia because parents often have a poor command of French (ibid.:67ff.). The transmission of French as a first language by native speakers of Marquesan and insufficiant transmission of the indigenous languages results in a kind of ‘semi-lingualism’ and develops into a new linguistic vernacular, possibly a ‘mixed language’ (ibid.).

In a 1996 census in French Polynesia 8064 inhabitants were counted on the Marquesas islands (Blanchard 1997) of which around five percent are not of Marquesan origin: the majority of the non-indigenous population are French ex-patriates which are either married to indigenous people or are working there for a limited period of time. The demographic situation in the Marquesan society is known to have undergone a dramatic development in the first 100 years of European contact beginning in the late 18th century. By 1920 the depopulation found its climax: less than 2000 indigenous people were counted. According to some estimates there was a drop of almost 95% of the population compared to that in pre-European time (Rollin 1974). The demographic situation has slowly improved . Today around 70 % of the Marquesan population is under 30 years of age. This means that only a minority of Marquesan people – around 2000 speakers – have not grown up under the influence of French media, western life-style and an intensive exposure to the French language. Only a few of these speakers – mostly 60 years or older – have still a profound cultural knowledge (myths, legends, traditional prepartion techniques etc.).

Hughes, H.G.A. & S.R. Fischer (eds.) (1998), “Introduction”, in: Crook, P./ Greatheed, S. & Tima’u Te’ite’i, An essay toward a dictionnary and grammar of the lesser-Australian language, according to the dialect used at the Marquesas